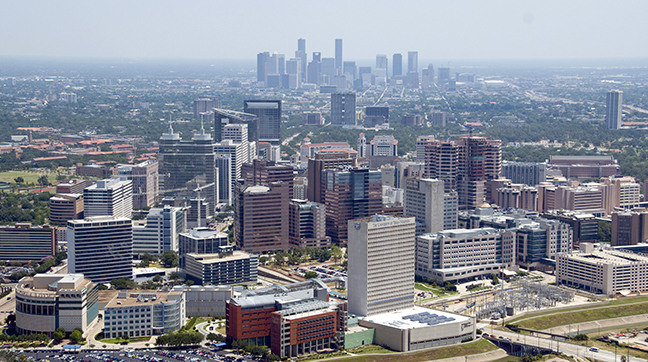 Houston's internationally diverse population, strong economy, culture and low cost of living have propelled it to the top of many national lists, including the "Coolest City in America" list in Forbes Magazine.

The campus of the GSBS is the Texas Medical Center, among the world's largest, most modern, and best equipped facilities for training in the basic biomedical sciences as well as translational and clinical research. The TMC occupies 675 acres on an attractive site two miles southwest of downtown Houston, as seen in the aerial view shown above , and includes more than 20 academic institutions plus hospitals and patient care facilities. The campus is immediately adjacent to Rice University and “the Village,” a student centered collection of shops, restaurants, and entertainment. The TMC is also approximately three miles from the University of Houston’s main campus and its facilities and activities.

The most comprehensive academic health sciences university in Texas, The University of Texas Health Science Center at Houston comprises the schools of Medicine, Dentistry, Public Health, Nursing, Health Information Sciences, the Graduate School of Biomedical Sciences, the Institute of Molecular Medicine, and many associated research institutes and centers. Founded in 1972, more 4,400 students are enrolled at UTHealth.

The University of Texas MD Anderson Cancer Center is one of the one of the world's most outstanding centers devoted to cancer research, education and prevention, as well as patient care. Its departments include many of the basic sciences essential to understand the function and proliferation of cancer cells and the normal tissues from which they arise. MD Anderson has more grants from the National Cancer Institute than any other institution in the world, and it is the #1 ranked cancer hospital in the U.S. Approximately 2,700 students take part in educational and research programs each year at MD Anderson.

The Texas A & M University Institute of Biosciences and Technology studies molecular and cellular aspects of agriculture and medicine and encourages the technology transfer of research discoveries to the marketplace. GSBS students are able to study with IBT scientists who are members of the GSBS Faculty.

A wide variety of student services, from copy and printing services to the Recreation Center to financial aid and health services are available to GSBS students.