The Association of Minority Biomedical Researchers will be featuring interviews with its members as a way to highlight GSBS students and life inside and outside of the lab. This feature will be posted on the group's website and Facebook page. AMBR’s fourth spotlight features an interview with GSBS neuroscience/immunology Ph.D. candidate Alexis Mobley conducted by AMBR Event Coordinator Celso Catumbela. 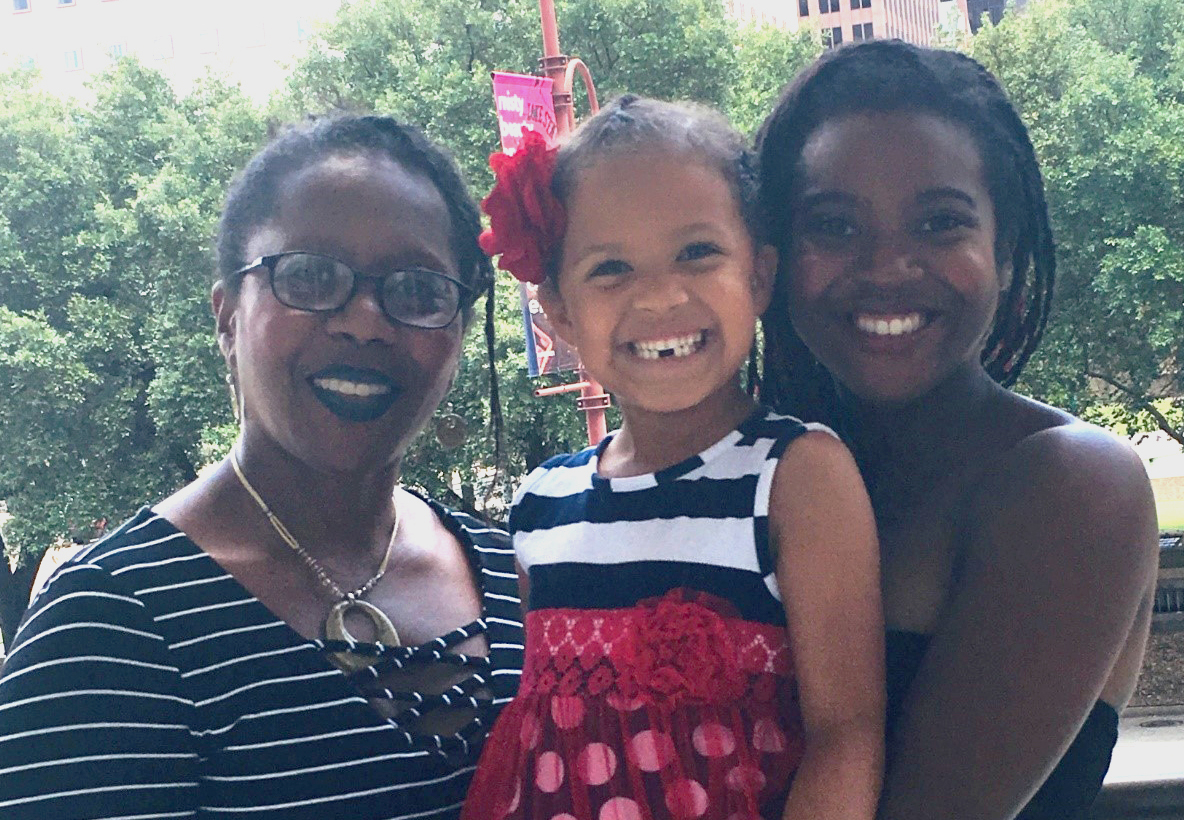 Alexis, right, with her mother, Sandra, left, and her daughter, Blake.

Juggling personal responsibilities in one’s life while studying in graduate school can be a difficult task on its own, but for some GSBS students, this juggling act also includes children. So how does one rise to the challenge of juggling personal life, family, and research? Well, for Alexis Mobley, it requires a bit of creativity and adaptability, both traits instilled in her since childhood, and a strong support system.

As the only child of two members of the U.S. Air Force, Alexis found herself constantly on the move. To cope with the constant relocations, she became an expert in assimilating and adapting to different communities and frequently engaged in creative outlets.

“I grew up loving things that were imaginative and abstract,” she said. “I loved astronomy, watched cartoons, read fantasy books, and enjoyed a lot of anime, which were all very out-of-this-world and helped me expand my creativity.”

However, Alexis’ academic instructors were not always enthusiastic about her creativity and even questioned whether she was a capable student.

“I was always a curious child and consistently annoyed my parents and teachers with questions,” continued Alexis. “I grew up writing quite imaginative stories and at times, found it difficult to follow the typical school model of writing, which sometimes required sticking to a single mode of explanation or thought process. This led to some of my instructors finding it difficult to understand my style of writing and telling me that I wouldn’t amount to anything.”

As some graduate students may have experienced on their own, discouraging words from middle or high school educators can lead to crippling doubts of one’s abilities, but fortunately for Alexis, her mother decided to remove the mantle of responsibility from such instructors and tutored her for a year.  This loving act would ensure that Alexis remained shielded from the careless words that could have otherwise severely undermined her potential.

Alexis’ ability as a mother is made evident by the charm of her 8-year-old daughter, Blake. Just how charming is Blake, you ask? I’ll let Alexis explain: “Blake and I were in New Orleans and she needed to throw some trash away,” she said. “But all the trash cans were surrounded by bees and she was worried that she would somehow affect or hurt the bees. After some convincing, she finally walks over to a trash can and in the sweetest voice says, ‘Hi bees, I don’t mean to make you mad but I need to throw something away. Have a great day.’”

For Alexis, the key to motherhood is simple: “We communicate. She understands that I’m her mother first and foremost.” Such efficient communication has even allowed Blake to become a young scientist in the making.

“I try to integrate Blake in every aspect of my life,” she continued. “I’ve practiced presentations with her. I teach her about flow cytometry, ELISA, staining dyes, and all sorts of science.”

Despite this simple solution, Alexis is cognizant of the difficulties of motherhood.

“As a mother, I have to cultivate this other human being and make sure she turns out a decent person,” said Alexis. “And while in science you can fail and troubleshoot, as a mother, you have to be careful with how and what you say, because those words can stay with them.”

“I have to be very conscientious of the fact that she’s her own individual and there are just so many more confounding variables,” she continued. “So I remind her that she’s multidimensional and capable of anything.”

When first starting to pursuing research, Alexis was forced to subject Blake to some negative aspects of her career path. “The instability was tough in the beginning. Right as she was making friends, we sometimes had to move,” she said.

As Blake grew and became more aware of Alexis’ own sacrifices, she sought to help her mother in whichever way she could. “She’d do her best to be happy despite not being happy, and she sometimes wouldn’t tell me things in an attempt to stop me from worrying,” said Alexis. “So throughout each transition, I always stress to her that she’s loved and make sure she always feels supported.”

Alexis is well aware that the many challenges she and Blake have faced over the years has also allowed them to forge an incredible bond.

“I see her growing up and see so much of myself in her,” she said. “I’ve seen the best of myself in her and sometimes I also see some alarming portions of myself and I’m just like, ‘Baby, no. Don’t be like that,’” she continues, while laughing. “I make sure to remind her that the things she wants and the interests she has are important and will be listened to.”

As Alexis completed her undergraduate education and embarked on her career path, she was interested in neuroscience, but a retreat solidified her choice and helped her find a mentor.

”When I first started pursuing science as a career, I wanted to be more of a clinical laboratory scientist,” said Alexis. “During my first year, I went to the Neuroscience Program Retreat and attended a talk by Dr. Louise D. McCullough. After hearing about her research topic and the elegance with which she discussed it, I knew I wanted nothing else but the chance to work under her.”

At the time, Dr. McCullough did not intend to accept graduate students so soon after starting research at UTHealth. However, after witnessing Alexis’ enthusiasm for research and passion for neuroimmunology, she readily welcomed her as a co-mentee with Dr. Jaroslaw “Jarek” Aronowski. Only a few years later, Alexis would go on to become a recipient of a 2019 Dr. John J. Kopchick Fellowship, proving that it was indeed the right decision, for all of them. 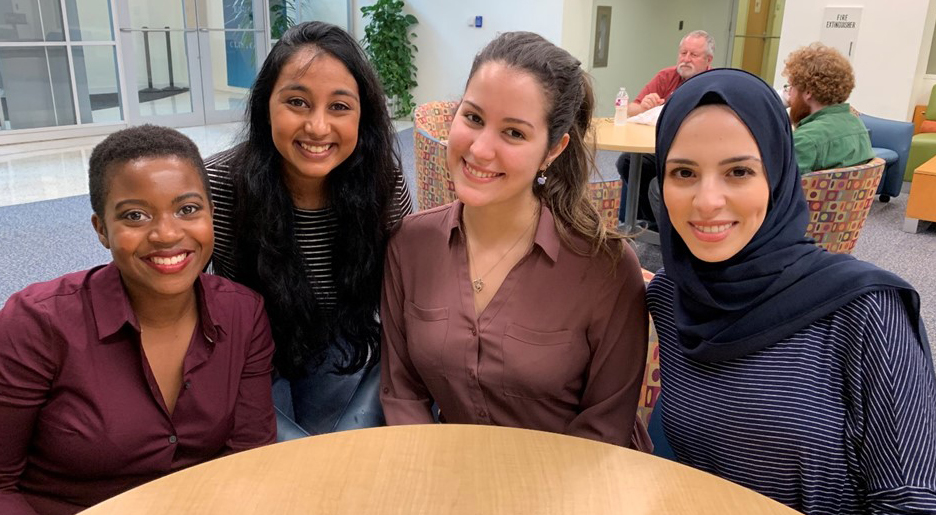 Alexis with her GSBS support system: “I also found a strong support core of fellow women in science, whom I call my queens,” said Alexis, with an absolutely ecstatic demeanor that emphasized just how fortunate she felt. “These girls are amazing, and we remind each other that we rock in science and always help one another through the struggles we share in grad school.”

When she’s not in the lab, Alexis relies on her community here in Houston to help her balance personal life, research, and raising her daughter.

“I knew the importance of building a community and finding people who will support the multiple aspects of you as a person,” said Alexis. “I played varsity tennis throughout high school, and never stopped loving it. As soon as I arrived [in Houston], I looked online for a community of tennis players that not only comes together for matches, but has now grown into a group of people who always care for my well-being, and are happy when I succeed in life.” 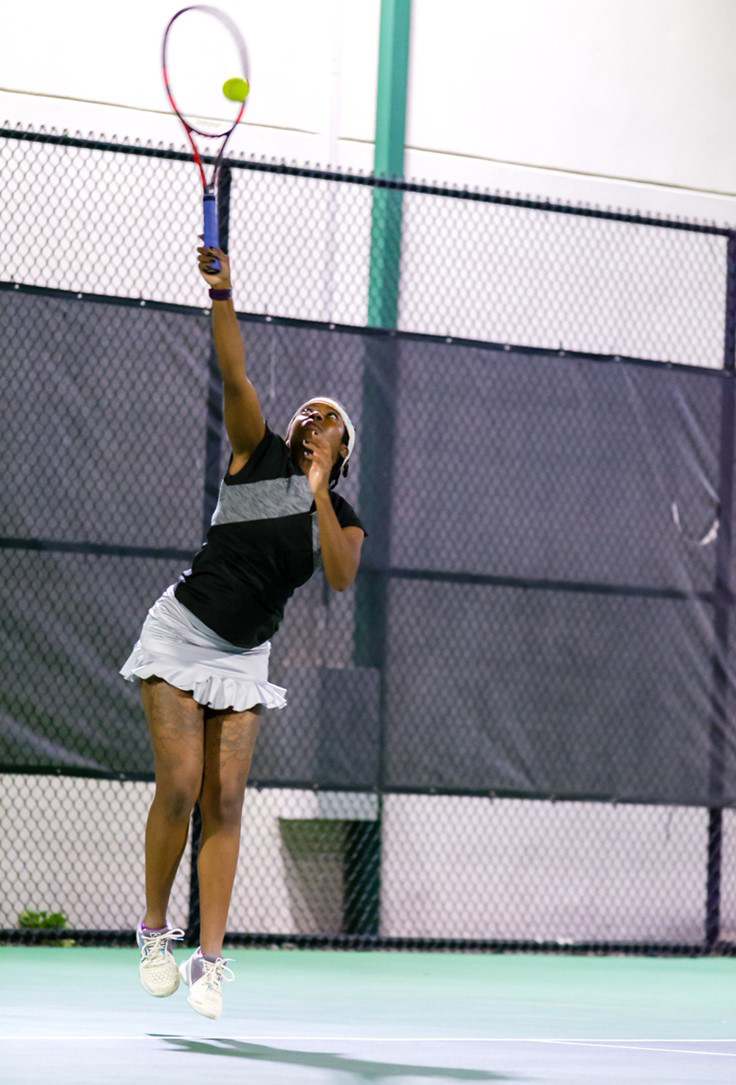 Alexis’ experience as a mother, daughter, researcher, and many more identities, has led her to cherish the uniqueness of others. “We’re all human. I know that I’m not just a biomedical researcher. I’m a mother, a writer, an advocate, a tennis player, an anime lover, a friend, and much more,” she says.

Alexis understands that facing challenges in both motherhood and research requires that we become comfortable with the uncomfortable. And importantly, she has a very simple advice for those with hurdles of their own: “Live out loud. Don’t be apologetic, don’t be afraid. You’ll be more weighed down because you’re hiding a fundamental part of yourself. Let people know who you are.”