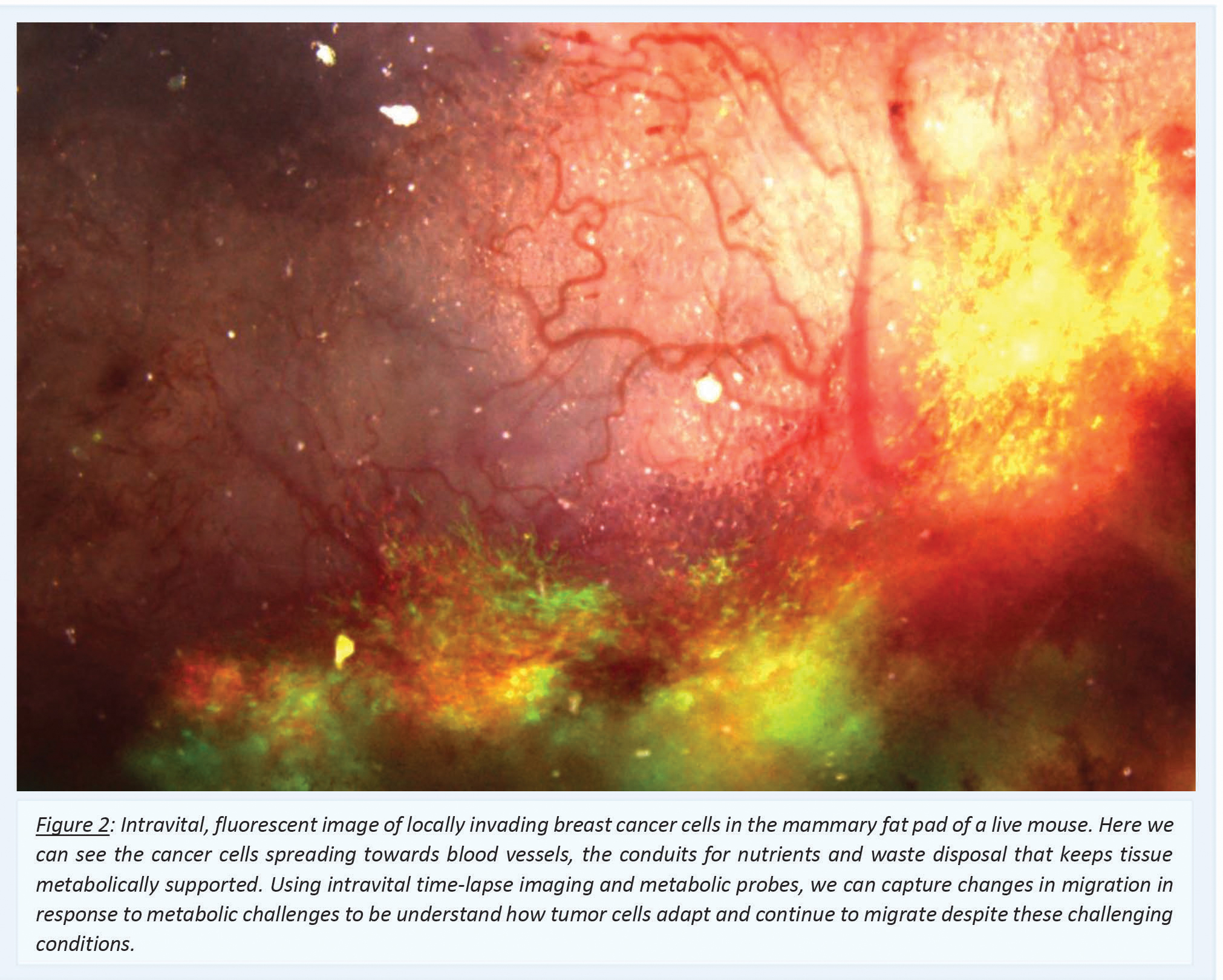 This article was written by GSBS student Ryan Nini, the third place winner of the GSBS Student Science Writing Contest. Nini is affiliated with the Program in Cancer Biology and his advisor is Peter Friedl, M.D., Ph.D.

Cancer is a family of diseases characterized in part by the uncontrolled growth of cells that can arise in any tissue. While reductive surgery historically has been the standard of care, treatment options have expanded considerably in the last century. Drugs such as Gleevac and tamoxifen have afforded once untreatable leukemia and breast cancer patients’ viable treatment options with considerable efficacy. Radiation therapy, chemotherapy, and the emergent immunotherapy have also afforded a modest improvement on patient survival over surgery alone. Each of these treatment options aim to target the cancer, by either stunting its progression or outright killing it.

While particular success stories of patients long outliving their prognoses offer glimmers of hope for cancer patients, the reality for many cancer patients is different. Cancers are complex, unforgiving diseases that often become less responsive to treatment over time.  Where patients may initially respond favorably to targeted therapies, cancer finds a way to circumvent the effects of treatment and reoccur more aggressive.

Disease statistics paint an unsettling picture. While other diseases such as stroke and chronic lower respiratory disease have seen improvement in survival the past 40 years, cancer remains the second leading cause of mortality in the U.S. Of all health care fields, new therapies in oncology are the least successful in clinical trials, with only 5 percent proving effective. Indeed, modest decreases in cancer-related mortality have been attributed to earlier detection via improved screening methods and wider implementation. This reveals a fundamental problem in the way we develop new cancer therapies.

When we talk about cancer, people often refer to the disease by its tissue of origin. Breast cancer, prostate cancer, lung cancer; these names reduce the disease to a malignancy of a specific organ. On the contrary, cancer can be seen as a whole body disease. Cancer cells interact with resident tissue, cultivating its local environment, and manipulating nearby cells to form a supportive home the way an animal might create a nest by foraging for sticks and foliage.

Cancer also spreads away from its resident tissue to another part of the body, just as an animal may migrate to other locales in response to cold weather or a food shortage. Metastasis, the process in which cancer cells disseminate from their site of origin to another part of the body, accounts for 90 percent of cancer-related deaths. This is likely due to metastatic cancer’s resistance to therapies and standards of care that are normally effective on primary forms of the cancer. Undeniably, metastasis is a preeminent process that must be addressed. Closing the gaps in our knowledge of this process may reveal treatments that will improve the survival and quality of life of cancer our patients.

Where metastasis encompasses the “big picture” process of cancer cells moving to and colonizing distant sites in the body, the process of cell migration specifically describes how cancer cells move. In order for cancer to colonize distant parts of the body, cancer cells must first locally invade tissue by initiating complex migration strategies. These strategies coordinate cell movement with tissue interactions and remodeling, facilitated by recruiting and engaging normal cells to aid invasion. While migration is typically associated with premetastatic disease, this process is an ongoing feature of cancer progression in both the primary lesion and established metastases. Indeed, cancer cells must migrate into normal tissue to overcome the metabolic and regulatory challenges faced by an ever expanding tumor. While current therapies focus on directly challenging cancer cells’ ability to grow and survive, perhaps targeting the fundamental cellular processes that drive cell migration will stop cancer in its tracks. However, to do so we must understand these processes.

Cell migration in both normal and cancer cells is a fundamental process regulated by diverse molecular programs and the tissue surrounding them. Cancer cells can migrate cohesively, with individual cells taking turns leading the group. In other situations, a single cell may lead a stream of cancer cells, probing the tissue for the best path while clearing it for its sister cells to follow.

Conversely, cancer cells can migrate on their own by gripping the local tissue tightly in a process known as mesenchymal migration. Further still, these cells can loosely associate with the tissue and propel their movement by expanding small bubbles or blebs called amoeboid migration. These migratory programs are not static; rather they are dynamic processes that change depending on metabolic demands and external stressors encountered by cancer cells.

As evident by previous work in our lab, low oxygen levels (hypoxia) can induce cancer cells to switch from collective migration to single-cell, amoeboid migration. Hypoxia, nutrient deprivation, and physical constraints of the surrounding normal tissue all present salient, clinically relevant challenges to cancer cells that may manifest in changes of migration patterns to compensate. Our lab’s work hypothesizes that each migratory mode adopted by cancer cells present distinct, contextual advantages.

My research aims to investigate how these metabolic and physical challenges affect the ability of breast cancer to progress and migrate in the body. Using my lab’s established mouse model and incorporating novel molecular tools, I will characterize how cancer cells dynamically react to changes in the tissue and assaults to their metabolism.

My lab uses an imaging modality called multiphoton microscopy, allowing us to peer into the depths of the mammary fat pad of living mice to monitor breast cancer cells and the tumor-associated tissue environment in real time. Simultaneously, researchers can measure the activity of key metabolic components in these cancer cells as they migrate to understand their role in driving cancer cell adaptation. Our discoveries in hypoxia-induced amoeboid migration only scratch the surface of ways that cancer cells can adapt to stress. Additional preliminary data suggests that cancer cells migrating in physically confining environment increases cellular respiration, further suggesting that cancer cells modulate their metabolism as an adaptive strategy. Understanding other ways in which these cells adapt and the mechanisms behind this adaptation can shed light to new therapeutic targets that can stop cancer in its tracks. 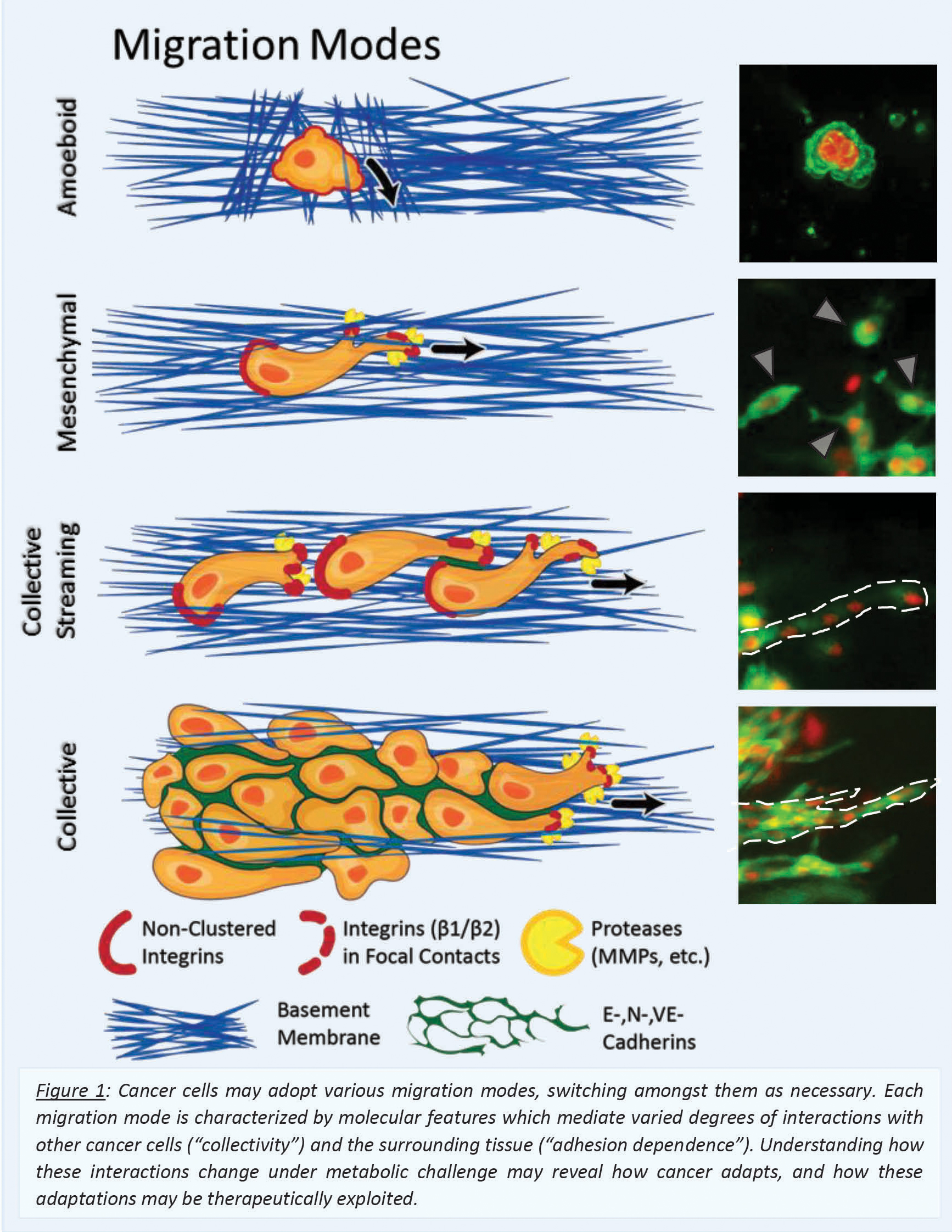