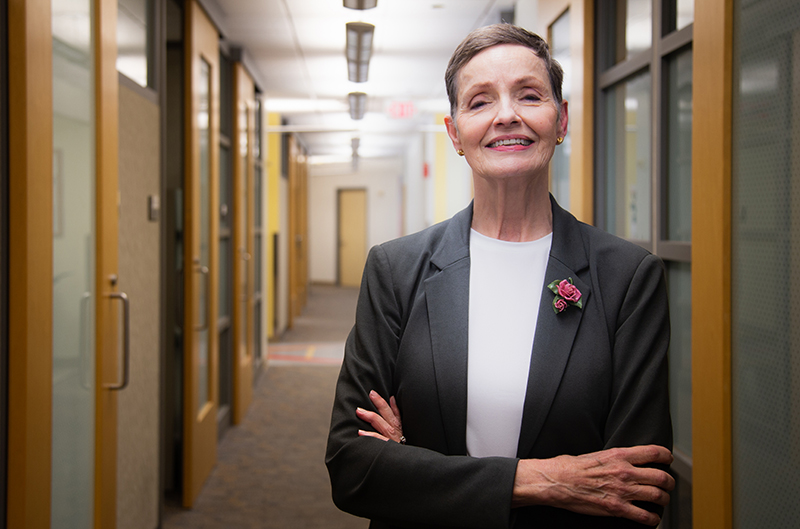 Kathryn Peek, Ph.D., currently serves as an adjunct professor in the Department of Neurobiology and Anatomy at McGovern Medical School at UTHealth, as well as a consultant who helps implement interinstitutional research and educational collaborations in Houston and the Texas Medical Center. (Photo by Maricruz Kwon/UTHealth)

Lab rats were the catalyst that spurred a decades-long interest in women’s roles in medical science and leadership for Kathryn Peek, Ph.D.

Peek recalled working on a stroke study in rats as a graduate student in the 1980s at MD Anderson UTHealth Graduate School, where she earned her Ph.D. Researchers were observing strokes in the animals and measuring the effects – looking at how strokes changed the metabolic rate and glucose levels in their brains.

But all the rats were male.

When Peek asked why, she was told the study was less reproducible in female rats, generally due to a broader range of reactions during the study, compared to male rats.

“I cared about strokes in people,” Peek said. “Clearly, there was evidence of biological sex differences in the way men’s and women’s brains reacted to stroke. We were ignoring it rather than investigating it. That was the dawn of my interest in women’s health and women’s roles in the biomedical workforce.”

Peek currently serves as an adjunct professor in the Department of Neurobiology and Anatomy at McGovern Medical School at UTHealth, as well as a consultant who helps implement interinstitutional research and educational collaborations in Houston and the Texas Medical Center.

Peek enjoys what she calls “living on the edge of the professional world,” but in the 1980s and 1990s, she became heavily involved in fostering women’s studies in medical science and in female leadership.

“In medical education, the normative human was a 25-year-old, 60-kilogram, white male,” she said. “That was the model for a human body in medical textbooks. It was believed there were very little differences in male and female bodies other than the reproductive systems. Cardiovascular, respiratory, immune, neurological systems – they are different – but we didn’t know that in the ’80s.”

Peek received grant support in the 1990s to establish a female clinical anatomy program at McGovern Medical School, then called The University of Texas Medical School at Houston, which helped integrate emerging research of female anatomy and physiology into programs at the school. During the same decade, while working at the University of Houston, Peek helped found the Women’s Studies Program, which has since evolved into a full degree program in Women’s, Gender, and Sexuality Studies, and served as associate vice president of health initiatives at the university.

In the late 1990s through the mid-2000s, she served as the director for the Institute of Women’s Health at Texas Women’s University.

Peek was a part of the first women’s faculty organization at UTHealth, and she later co-founded the Texas Medical Center Women’s Health Network.

“There was a history in the medical center that super talented women would rise in the hierarchy to a certain point, and they could go no further,” Peek said. “They ended up leaving the local institutions for places where they could break through the glass ceiling and reach those senior positions. It was a shame that we were training these women here but they had to leave to advance their careers. Thankfully, that has largely changed.”

Peek took a nontraditional path into her biomedical career. After 15 years teaching English at public schools in Texas and Louisiana while raising a family, she followed her dream and entered graduate school.

Taking night classes and courses during summers, Peek earned a Master of Science in biology from the University of Houston and a Master of Arts in behavioral sciences at the University of Houston at Clear Lake before coming to the MD Anderson UTHealth Graduate School in 1983. She was 38 at the time. She then went on to do postdoctoral work at Baylor College of Medicine.

Peek said the student population was mostly men when she came to UTHealth, and she was the oldest student in the class.

“I certainly experienced medical education differently from most of my classmates,” she said. “Up until that time, although I had two daughters, I had never thought about feminism or women’s role in the workplace. It was in those formative years that I became acutely conscious of how the roles of men and women aligned in the medical academic world.”

It’s a focus she’s maintained through several role changes, most recently by donating to the Women in Leadership Seminar Series? at UTHealth.

Peek has given a gift to the Women in Leadership Seminar Series, which has helped continue the popular program now in its third year. The series brings in speakers to inspire women leaders at UTHealth.

The program is under the leadership of Julianne Cenac, PhD, director of learning and development, and Eric Fernette, vice president and chief human resources office at UTHealth. They said gifts such as Peek’s show support to the community the program serves.

“I think it speaks to the vision that Dr. Colasurdo and senior leadership have for this program,” Cenac said. “We have a lot of women in this institution who are in leadership roles and looking at what we are doing to affirm them and position them for continued success. Dr. Peek’s gift meant everything.”

Fernette and Cenac said gifts like Peek’s ensure the longevity of the program.

Advice to a new generation

Peek has spent her career advancing opportunities for others. Her advice to those starting out is to stay focused on your competence, developing skills and knowledge, and to be accountable for the work done as well as what you believe in and support.

She also suggests seizing opportunities as they arise, and to stay focused on your interests, talents, and strengths. Find ways to focus and spend time on those things.

“There are plenty of opportunities here,” she said. “Do not burn bridges; maintain those professional and collegial contacts and those relationships.”

And, when success comes, keep the door open for others.

“As your status changes, hopefully it’s a progression forward, don’t forget those behind you,” she said. “Don’t forget to reach back and help the men and women in the trenches struggling in their career. Not only are you responsible for your own career, but at some point you’re responsible for the next generation that will follow you and continue your work.”