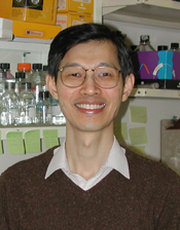 Our lab is interested in post-transcriptional regulation of mammalian gene expression, in particular, the role of mRNA turnover in determining the fate of cytoplasmic mRNA. One main project focuses on several critical and fundamental issues in the study of molecular mechanisms controlling mammalian mRNA decay: 1) how rapid deadenylation is triggered by RNA-destabilizing elements and how the process is regulated; 2) how, at the biochemical level, the regulation of the basic process of deadenylation, i.e., recruitment/activation of a poly(A) nuclease, impinges on mRNA turnover; 3) the directionality of exonuclease cleavage during mammalian mRNA decay and the roles the mammalian nucleases play in vivo.

In another project, we are interested in elucidating the mechanism by which mRNA decay mediated by the major protein coding-region determinant of instability (mCRD) of c- fos proto-oncogene mRNA is coupled to translation. This mechanism illustrates an extremely powerful means to achieve stringent control over transient expression of genes during cell growth and differentiation. It can be regarded as a "suicide" mechanism, in which the mRNA either remains stable but without expression into protein or gets translated and “killed” immediately via the mCRD. Ongoing efforts focus on addressing: 1) What cellular proteins mediate and/or regulate the c- fos mCRD destabilizing function? and 2) What mechanism couples mCRD mediated mRNA decay to ribosome transit during translation and how is the process controlled?