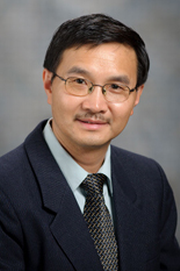 Epigenetic modifications, including DNA methylation and histone modifications, play crucial roles in regulating chromatin structure and gene expression. Over the last two decades, great progress has been made in identifying the enzymes responsible for adding and erasing these modifications. However, the biological functions of most epigenetic modifiers remain poorly understood. Our laboratory is interested in unraveling epigenetic mechanisms in health and disease. We use a variety of model systems, including mice, embryonic stem (ES) cells, and other cell lines, to investigate the roles of epigenetic modifiers in various biological processes, including embryogenesis, gametogenesis, metabolism, and tumorigenesis. Currently, we are actively pursuing the following projects: 1) Defining the interplays between histone lysine methylation and DNA methylation in the establishment of genomic imprinting during gametogenesis; 2) Exploring the role of the histone demethylase KDM1B (also known as LSD2 or AOF1) in cancer formation and progression; and 3) Investigating the roles of the histone methyltransferase SetDB1 (also known as ESET or KMT1E) in metabolism, immunity, tissue regeneration and repair, and stem cell functions.