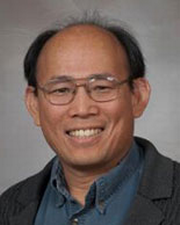 Circadian rhythm is found in phylogenetically distant species from cyanobacteria to human. Circadian rhythm is the organismal adaptation to the daily light-dark cycle as the earth spin around the sun. In human, the most obvious feature of circadian rhythm control is our sleep-wake cycle. At the physiological and biochemical level, the circadian clock controls many of the diurnal cellular and molecular processes including hormonal cycles, cell proliferation and apoptosis in vivo. Pathological effects associated with our circadian clock such as the frequency of asthma attack, heart attack, and strokes are heavily biased towards the early morning.

My laboratory contributed the landmark discoveries by identifying the mammalian Period 1 (mPer1) and Period 2 (mPer2) genes (Sun et al., 1977 and Albretch et al.,1977). Our genetic studies demonstrated that both mPer1 and mPer2 are key circadian regulators (Zheng et al., 1999). Mice genetically engineered to have no mPER1 and mPER2 function have no circadian rhythm and they are completely responsive to external signals such as very short light-dark cycles (Zheng et al., 2001). One of the research goals in the laboratory is to understand the mechanistic role played by mPER1 and mPER2 in the mammalian circadian clock.

Our studies also demonstrated that mice without circadian clock function are very sensitive to genotoxic stress. Independent studies have shown that many human tumors frequently display abnormal PER1 and PER2 levels. Key cell cycle genes such as c-Myc, Cyclin D1, Cyclin A, Cyclin B, Cdc2, Wee1 are deregulated in temporal expression in circadian mutant mice (Fu et al., 2002). One of the research interests in the laboratory is the further investigation of circadian rhythm is cell cycle regulation and in DNA damage response.

Studies have implicated that the mechanism of mammalian circadian rhythm is tie to the cellular redox regulation. Our work demonstrated that the prosthetic molecule heme is an important regulator of the circadian clock mechanism in mammals illustrating the reciprocal control between heme biosynthesis and the circadian rhythm mechanism in vivo (Kaasik and Lee 2004). Since redox and heme functions are largely related to metabolic processes, it raises the role played by circadian function in hypometabolic behaviors such as hibernations and torpor.  Our recent studies identified genes in peripheral tissues that were activated by constant darkness, an environment encountered by mammals during hibernation. Our studies revealed that such gene activation was associated with the level of circulating 5’-adenosine monophosphate (5’-AMP). Mammals given 5’-Amp can enter a deep hypometabolic state that mimics behaviors observed in hibernation and torpor (Zhang et al, 2006). One of the research goals in the laboratory is to understand the mechanism underlying the 5’-AMP mediated hypometabolic state in mammals.