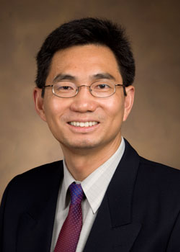 Dr. Zhao has broad interests in the area of bioinformatics, systems biology, precision medicine, translational science, and big data science. In addition to his independent research projects to study genetic architecture of complex disease and regulatory mechanisms, he has also actively collaborated with investigators university-wide, nationally and internationally. Projects and techniques are below.

With the inspiration of many recent discoveries that a substantial fraction of the genomic variation affecting risk of common disease is located in regulatory regions, in this project, we combine bioinformatics, statistical genetics, and phenotype and electronic medical record (EMR) data mining to develop novel analytical strategies that maximally leverage regulatory information from both genotype and expression, aiming to predict phenotype using transcriptomic alteration with DNA variation.

Since 2009, our lab has applied next generation sequencing to discover actionable mutations in cancer, developed bioinformatics approaches to detect cancer driver mutations and genes from massive cancer genomic data, studied the downstream events driven by a cancer driver mutation, and developed pharmacogenomics approaches to identify existing drugs for new disease (drug repositioning). We have developed a series of methods, tools and databases in such studies as well.

We have developed novel bioinformatics and systems biology approaches and applied them to the genetic data in schizophrenia, bipolar disorder, depression, etc. One of the projects is to combine RNA-seq data from postmortem brain tissues of schizophrenia and bipolar disorder subjects with the genome-wide association studies (GWAS) data, so that how genetic changes affecting these two major mental disorders could be better understood.