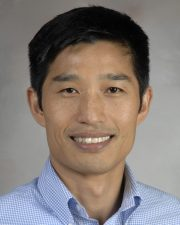 Dr. Li’s lab aims to identify novel therapeutic approaches to reduce mortality and disability resulting from stroke and Alzheimer’s disease. His lab is currently studying the impact of stroke-induced breathing disorders in cognitive impairment.  Stroke is the leading cause of long-term disability in the United States. The major contributors to stroke-related disability are motor and cognitive deficits, which tend to worsen over time, especially in aged individuals. Stroke also accelerates other age-related diseases, such as Alzheimer’s disease (AD) and cerebral amyloid angiopathy (CAA). The prevalence of central respiratory dysfunction is high in stroke patients and it impairs recovery and increases mortality. Studies investigating the mechanisms underlying stroke-induced respiratory dysfunction (SIRD) are in their infancy. Even less is known about how disordered breathing can influence motor and cognitive outcomes after stroke, especially in aged individuals that have other features of neurodegeneration, including cerebral amyloid. It has been recently discovered that stroke induces astrogliosis in brain areas remote from the infarct, including chemoreceptor areas of the brainstem. The lab is currently focusing on studying how stroke affects control of breathing in “normal” aging, in AD and in CAA, and whether treatments designed to improve this respiratory phenotype reduce disease progression and improve cognition.

Another line of research in the lab is axonal plasticity, neuronal and vascular regeneration, as well as brain functional recovery after cerebral ischemia. Dr. Li has long-standing interests in the profound impact of biological variable including gender and aging on stroke outcome. His team has extensive experience of in vivo and in vitro stroke models, pharmacology, brain blood flow measurements, brain immune regulation, viral vector transduction, models for neurite plasticity studies and long-term brain functional recovery assessments.