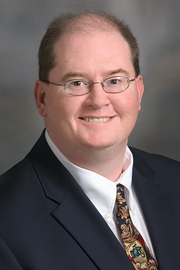 In the Bratton laboratory, we are primarily interested in two basic areas of research: apoptosis (programmed cell death) and autophagy (self-cannibalism).  Apoptosis is critical for normal development in multicellular organisms from flies to humans, and it works in concert with cell division to maintain the normal size and function of adult tissues.  Diseases associated with increased rates of apoptosis, include neurodegenerative disorders (Alzheimer's Disease and Parkinson's Disease), AIDS, myelodysplastic syndromes, and ischemic injury (stroke and myocardial infarction), whereas those associated with inhibition of apoptosis, include autoimmune diseases and cancer.  In fact, defective apoptosis is a hallmark of cancer and a major cause of resistance during cancer therapy.  Autophagy, on the other hand, is primarily a cell survival rather than a cell death process.  In cells deprived of growth factors or nutrients, intracellular proteins and even entire organelles are broken down and proteolytically digested within lysosomes in order to provide energy and macromolecules for essential biosynthetic pathways.  Autophagy therefore plays an important role during tumorigenesis, and it promotes chemoresistance by allowing tumor cells to remove damaged proteins and organelles.  Finally, emerging evidence suggests that cross-talk exists between apoptotic and autophagic pathways, in that established regulators of apoptosis, such as the tumor suppressor p53 and antiapoptotic Bcl-2 family members, also regulate autophagy.

Projects/Techniques:  Below, I have provided a few of the ongoing projects in my laboratory.  We utilize a wide-array of techniques to address biologically important questions, including recombinant protein engineering and expression, various molecular biology approaches (e.g. PCR, cloning, mutagenesis, RT-PCR), cell culture, flow cytometry, fluorescence microscopy, and generation of novel mouse models.

Caspase-activating complexes: Most toxicants induce apoptosis by triggering the activation of caspases (cysteinyl aspartate-specific proteases).  Initiator caspases are activated through their association with specific adapter proteins, and in turn, activate effector caspases that cleave cellular proteins and dismantle the cell.  Thus, caspases are activated through unique signal transduction pathways, and our general goal is to understand, in molecular detail, how these caspases are activated and how their activities are modulated.  We are particularly interested in a multimeric complex known as the apoptosome.  This large complex—composed of seven Apaf-1 (apoptosis protease-activating factor-1) proteins and formed in response to mitochondrial stress—binds to the initiator caspase-9 to form a holoenzyme that subsequently activates the effector caspases-3 and -7.  We are currently studying the regulatory mechanisms that control the activity of this complex in vitro and in vivo.

Inhibitor of apoptosis (IAP) proteins and IAP antagonists: IAPs are important antiapoptotic proteins present throughout nature. In humans and rodents, at least one family member, XIAP (X-linked IAP), is an established inhibitor of caspases-9, -3 and -7. However, it remains unclear how other family members suppress apoptosis.  We are currently investigating the mechanisms whereby other IAPs, such as cellular IAP1 (cIAP1) and cIAP2, as well as Drosophila IAP-1 (DIAP1) and DIAP2, suppress apoptosis in human and fly models of cell death. The fly IAP antagonists, Reaper, Hid (head involution defective), Grim, Sickle, and dOmi, are thought to induce apoptosis during development by antagonizing DIAP1.  Recent studies in our laboratory and others, however, suggest that these IAP antagonists may promote cell death through mechanisms that do not involve antagonism of DIAP1 per se.  Thus, we are actively pursuing these alternative pathways to death.

TRAIL-induced apoptosis and resistance in prostate cancer: Tumor cells are normally removed from the body, in part, through the activation of death receptors located on tumor cells, such as Fas/CD95 or death receptors-4 and 5 (DR4/5).  These receptors are activated by their cognate ligands, FasL and Tumor necrosis factor-related apoptosis-inducing ligand (TRAIL), respectively, and TRAIL has potential therapeutic value due to its capacity to induce apoptosis selectively in cancer cells.  In fact, recombinant TRAIL and agonistic antibodies to DR4/5 are currently in clinical trials for the treatment of various cancers.  Unfortunately, ~50% of tumors exhibit resistance to TRAIL.  We are investigating the primary mechanisms of TRAIL resistance in prostate cancer using both in vitro and animal models.

PhD, The University of Texas at Austin, 1999