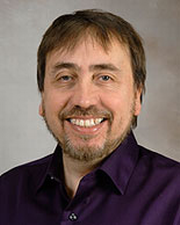 For the past 15 years, Dr. Soto’s group has been engaged in research into the molecular basis of neurodegenerative diseases associated to the misfolding and brain accumulation of proteins, particularly focusing in Alzheimer’s and prion-related disorders. His work include basic science projects as well as translational research aimed to the development of novel strategies for treatment and diagnosis of these diseases.

Dr. Soto’s group developed a new model to explain amyloidogenesis in Alzheimer’s brains, which proposes that amyloid formation is triggered by conformational changes in the normal amyloid-ß protein. He also identified some of the factors that may induce the misfolding of the amyloid-ß protein and provided strong evidences that at least some of them (for example apolipoprotein E, RAGE receptor) might play a critical role in vivo. In the last eight years, the lab has been working on strategies for alternating protein misfolding and aggregation in order to learn more about the molecular mechanism of this process and to generate novel approaches for therapy and diagnosis. The work has been built around two important discoveries that represents novel platform technologies: beta-sheet breakers peptides for preventing and correcting protein conformational changes and aggregation (therapeutic use) and the concept of cyclic amplification of protein misfolding for detecting the early pathogenic event in these diseases (diagnosis use).

Our research has also focused on understanding the mechanism by which misfolded proteins induce cell death and tissue damage. Our recent work has demonstrated that misfolded prion protein induces neuronal apoptosis through endoplasmic reticulum stress pathway. Nano-molar concentrations of purified misfolded protein kill cells in culture by inducing the activation of the ER-resident caspase-12, which in turn activates the executor caspase-3. Interestingly, the initial response to ER-stress is a defense mechanism characterized by the up-regulation of ER chaperones. We have identified one of these chaperones as a key element on this pathway, which is specifically overexpressed in individuals affected by TSE and may lead to a novel strategy for early diagnosis.
Recently, we have become interested in the identification of non-disease-associated protein undergoing misfolding and aggregation as part of the normal biological function of the protein. Our recent studies show that a bacterial protein normally polymerizes as amyloid-like aggregates which participate in modulation the biological activity of the protein. The expansion of the amyloid and prion concepts towards many other proteins might revolutionize our understanding of biology.