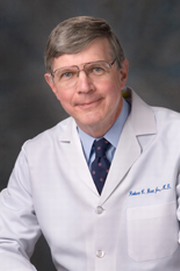 Our laboratory is addressing three of the critical problems in the management of ovarian cancer, including late detection, drug resistance and tumor dormancy, while attempting to understand the heterogeneity of ovarian cancers at a cellular and molecular level.

1. Function of imprinted tumor suppressor genes that are downregulated in ovarian cancer. Over the last decade, we have identified several imprinted tumor suppressor genes whose expression is decreased or lost in ovarian cancer. Among these, we have best characterized ARHI (DIRAS3) which encodes a 26kD GTPase with 50% homology to Ras, but with an opposite function that can be attributed to a 34 amino acid N terminal extension. ARHI is downregulated in 60% of ovarian cancers associated with decreased disease free survival. Expression from the single functioning allele can be inhibited by LOH, hypermethylation or transcriptional regulation by E2F1 or E2F4 in different cancers. Re-expression of ARHI inhibits proliferation and motility while inducing autophagy and tumor dormancy. Current studies, funded by an R01, concern mechanisms underlying ARHI-induced autophagy and requirements for survival of dormant ovarian cancer cells. For these studies, we have developed the first inducible model for tumor dormancy in ovarian cancer.

2. Individualized enhancement of primary sensitivity to paclitaxel in different ovarian cancers. Through a high throughput kinome siRNA screen, my laboratory has identified more than 30 kinases that regulate paclitaxel sensitivity in ovarian cancer cell lines by modulating centrosome function (SIK2), paclitaxel retention (CDK5) or microtubule stability (ILK, FER). Both fundamental studies of mechanism and translational studies of siRNA therapy in combination with paclitaxel are being pursued.

3. Identification of biomarkers and strategies for early detection of ovarian cancer. Having developed the CA125 serum assay for monitoring ovarian cancer, we have tested some 115 potential biomarkers to identify four biomarker panels for early stage disease. Currently, we are testing several such panels for their ability to discriminate women with pre-clinical and early stage disease from healthy women. Supported by an Ovarian SPORE, a multi-year screening trial is being conducted in 3000 apparently healthy postmenopausal women to evaluate the specificity and positive predictive value of ultrasound in a small fraction of women with rising levels of biomarkers from year to year. To date, the trial has prompted 8 operations to discover 5 cases of ovarian cancer, all in early stage, consistent with a positive predictive value of 37%, i.e. only 3 operations per case of ovarian cancer detected. To facilitate these studies, we are collaborating with investigators at Rice to place assays on nanobiochips for testing at point of service. Recent work with protein expression arrays has identified a panel of 115 auto antibodies which promise to detect pre-clinical disease in a larger fraction of women.

A tutorial in our laboratory will provide experience with mechanisms underlying ARHI-induced autophagy and requirements for survival of dormant ovarian cancer cells, fundamental studies of mechanism and translational studies of siRNA therapy in combination with paclitaxel for ovarian cancer. In addition, students will be able to learn about identifying biomarkers for ovarian cancer. Through our weekly lab seminars, a student will also gain experience in preparing and presenting scientific presentations.