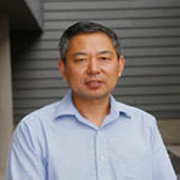 We are interested in the function and mechanisms of a group of seven transmembrane domain receptors that have fundamental roles in normal development, survival of adult stem cells, and carcinogenesis.  These receptors, named leucine-rich repeat-containing, G protein-coupled receptor 4, 5, and 6 (LGR4-6), belong to the glycoprotein hormone receptor subfamily of the rhodopsin-like G protein-coupled receptors.  LGR4 is essential for embryonic development and the survival of adult stem cells while LGR5 and LGR6 are specifically expressed in unique population of adult stem cells in the gut and skin.  We have recently identified R-spondins are endogenous ligands of LGR4-6. R-spondins are a group of four secreted proteins (RSPO1-4) that are known to have essential roles in development and stem cell survival, too.  Furthermore, LGR4-6 and RSPOs are also implicated in carcinogenesis for their overexpression in tumor cells and control of tumor cell growth and migration. Despite significant homology to G protein-coupled receptors, activation of LGR4-6 by RSPOs shows no evidence of coupling to heterotrimeric G proteins.  Instead, stimulation of LGR4-6 by RSPOs leads to robust potentiation of Wnt/beta-catenin signaling. Our laboratory is focused on identifying the molecules that mediate the activation of LGR4-6 to Wnt/beta-catenin signaling and then delineate the detailed mechanisms of this signaling pathway.  Understanding of these novel signaling mechanisms will not only have signaling impact on the general knowledge of receptor signaling but also facilitate the development of potential therapeutics in cancer treatment and regenerative medicine.