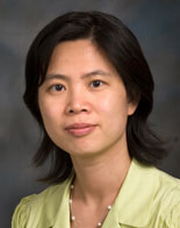 Defects in the ability of cells to properly respond to and repair DNA damage result in genomic instability and underlie many forms of cancer. The goal of our research is to understand how cells respond to DNA damage and safeguard the integrity of the genome.

Cells have evolved a complex sensory network called the DNA damage response (DDR) to respond to genotoxic stress. The DDR coordinates cell cycle regulation, DNA repair, chromatin reorganization and transcription in response to damage. Once DNA damage is sensed, a phosphorylation signaling cascade is initiated by the central DNA damage kinases, ATM and ATR. Recently, a DNA damage induced ubiquitin signaling pathway has also emerged that works together with phosphorylation-dependent signaling to recruit essential repair factors to the sites of DNA damage. Damage-induced ATM/ATR phosphorylation on S139 of histone H2AX directly recruits MDC1 through MDC1’s BRCT domains. MDC1 itself is a substrate of ATM/ATR, and its phosphorylation leads to the recruitment of a ubiquitin E2/E3 ligase RNF8/UBC13 to damage sites. We are seeking to identify additional players in this signaling cascade and investigate the role of each player in the DNA damage repair and signaling, as well as its role in cancer progression.

The RNF8/Ubc13-dependent ubiquitination on the damaged chromatin creates docking sites for BRCA1 complexes. The BRCA1 tumor suppressor is associated with hereditary breast and ovarian cancer and plays critical roles in DNA repair, cell cycle checkpoint control and maintenance of genomic stability. BRCA1 contains two C-terminal BRCT repeats and a N-terminal RING domain that binds BARD1 forming an E3 ubiquitin ligase. Recently we have identified a novel BRCA1 associated protein complex, the Rap80/Abraxas/BRCA1 complex (BRCA1-A complex). In this complex, Abraxas contains a phosphorylated SPxF motif at its C-terminus that associates with the BRCT domain of BRCA1. The BRCA1-A complex also contains a deubiquitination enzyme BRCC36. We are currently investigating how the BRCA1-A complex is involved in BRAC1’s function in breast tumor suppression.

In summary, we are interested in using various biochemical and genetic approaches, such as gene knockouts, mass spectrometry, and genetic screens using siRNA libraries, to identify important players in the DNA damage response and define the roles of these proteins in maintaining genomic stability and tumor suppression.