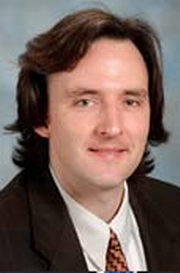 Studies in our group currently address soft tissue sarcoma biology with particular interest in the early genetic changes associated with tumorigenesis. Soft tissue sarcomas are a large family of malignancies showing various patterns of mesenchymal differentiation. Precursor (in situ) lesions are not described in soft tissue sarcomas and little is known of the cell of origin. A subset of sarcomas are associated with unique chromosomal translocations that produce a novel fusion genes that appear to drive their biology (e.g., Ewing sarcoma, synovial sarcoma, clear cell sarcoma, dermatofibrosarcoma protuberans, & alveolar soft part sarcoma) while others are associated with an initiating single activating point mutation in a proto-oncogene (e.g., desmoid fibromatosis and gastrointestinal stromal tumor). We have examined the prevalence and type of mutations present in various sarcomas and correlated these with tumor biology and clinical outcome. One model system is desmoid fibromatosis where we are characterizing beta-catenin (encoded by CTNNB1) exon 3 mutations and have discovered a high incidence of such mutations. These mutations cause beta-catenin to accumulate in the nucleus and act as a constitutive transcription factor in concert with other nuclear proteins. Unlike epithelial tumors with beta-catenin mutations, we see only three specific mutations. This finding indicates that the specific mutation present may have biologic significance. We are using human tumor samples and cell lines derived from human tumors to understand the role and significance of the beta-catenin pathway in desmoid tumors. We are attempting to model desmoid tumors by expressing mutated beta-catenin in fibroblasts and primitive mesenchymal cells.  This study has led to the development of a molecular diagnostic test used in our clinics.  Other sarcoma model systems are approached in similar fashion. We believe that the early genetic aberrations in sarcomas are critical for their formation and that increased understanding of these pathways may provide insights leading to better, more precise diagnoses and clinically relevant therapeutic interventions.

A second focus of research is the Muir-Torre syndrome. Patients with this rare syndrome have both cutaneous sebaceous tumors and internal malignancies (commonly colon or endometrial carcinomas). A non-functional copy of a DNA mismatch repair gene (usually MSH2) is inherited and loss of the remaining functional allele leads to tumorigenesis by poorly understood mechanisms. These tumors show a unique molecular signature termed microsatellite instability (MSI). We are cataloging the mutations that accumulate in sebaceous tumors and have recently demonstrated that mutations in LEF-1 in the Wnt/beta-catenin pathway are present in these tumors and act as dominant negatives. This provides insight into the pathogenesis of sebaceous tumors and perhaps developmental pathways in these cutaneous organs. This work is complemented by a close collaboration with Dr. Stephen Lyle (University of Massachusetts Medical Center, Worcester) examining early cell signaling events that allow skin stem cells to assume a follicular, sebaceous, or interfollicular epithelial fate.

Depending on the student’s interests, a tutorial in our laboratory would provide experience with DNA analysis and protein expression in human tumors, cell culture, immunohistochemistry, and issues surrounding resistance to chemotherapy, genetic testing, and inherited cancer predisposition. Knowledge of skin and soft tissue structure, function, and neoplasia would also be obtained.

M.D./Ph.D. - The University of Texas Southwestern Medical Center at Dallas - 2000