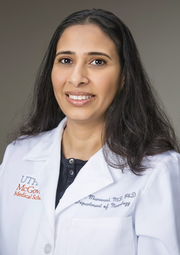 Another line of interest in the lab is Cerebral Amyloid Angiopathy. Cerebral amyloid angiopathy (CAA) is an Alzheimer’s disease related dementia (ADRD). The deposition of amyloid around the blood vessels in the brain causes CAA. CAA is characterized by small microbleeds in the brain, which not only lead to devastating spontaneous hemorrhagic stroke in the elderly, but also vascular dementia. Therefore, this disease has a high mortality and disability. Interestingly, Alzheimer’s disease has been known to be sexually dimorphic. Elderly women have been found to have more Alzheimer’s disease pathology in their brains as compared with men. Such differences are understudied in CAA, which shares almost similar disease pathology. Using mouse models of CAA, we study sex differences in CAA across the lifespan. Our lab is interested in the fibrinolytic system and we study the interplay of fibrinolytic system and age in understanding the sexual dichotomies in CAA.